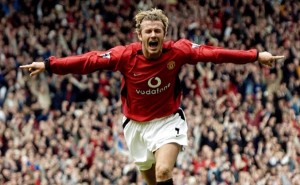 (FILES) In a file picture taken on May 3, 2003 David Beckham celebrates after making it Manchester United 1-Charlton 0 during their English Premier League football match at Old Trafford, in Manchester. David Beckham is to retire from professional football at the end of the season, his representative announced on on May 16, 2013. The 38-year-old midfielder has played for Manchester United, Real Madrid and AC Milan, as well as winning 115 caps for England, and recently won the French Ligue 1 championship with Paris Saint-Germain. AFP PHOTO / PAUL BARKERPAUL BARKER/AFP/Getty Images